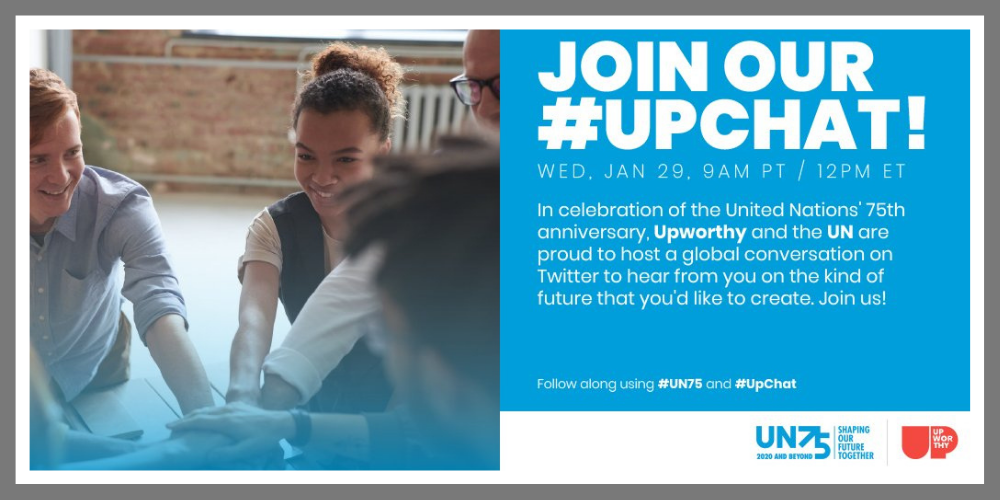 This is an exciting opportunity for you to lend your voice to a global conversation and tell the world about what sort of future you’d like to create.

The Twitter chat is organised in relation to the UN75 Launch Event on January 29th. It’ll be hosted by youth along with the Secretary-General at their NYC HQ.

Below are some details for your review. Please tweet #UN75 or #UPChat if you have any questions or thoughts. As usual, I will be joining this conversation.

So, you’re joining Upworthy for a live Twitter chat! This guide will help you handle the basics of participating in an UpChat so that you can relax and have fun.

Upworthy structures the chat as a simple question-and-answer session where the @Upworthy Twitter account asks a series of 7-10 questions throughout the hour. These questions are numbered (Q1, Q2, Q3, etc. etc.) and are tagged with the custom UpChat hashtags. Example:

There are a couple of ways to respond to an UpChat question:

1) Compose a new tweet from your account with your answer and type “#UpChat #UN75” at the end. The hashtags ensure that folks can watch the conversation evolve in real time without having to follow twenty different accounts, so it is essential to include it in your answers.

In keeping with the Q&A format, please add “A” and the question number you are answering at the start of the tweet to eliminate confusion. For example, if you are answering Q1 above, your tweet would look like this:

A1: This is a really fascinating response to this question. #UpChat #UN75

You can also add @Upworthy to the end of your tweet. It will be seen in their mentions — rather than just from tracking the hashtag — and they are more likely to respond to it. If you choose to add @Upworthy, make sure to add it at the very end of the tweet, like so:

A1: This is a really fascinating response to this question. #UpChat #UN75 @Upworthy

2) You can tweet at Upworthy with your answer. However, if you decide to tweet directly at them, it is vital that you add a period in front of “@Upworthy” in your tweet.

.@Upworthy A1: This is a really fascinating response to this question. #UpChat #UN75 @Upworthy

Adding a period before @Upworthy in this tweet ensures that people on your timeline will see the tweet.

If you do not add the period, the only people who will see your answer will be yourself, @Upworthy, and anyone who follows both you and @Upworthy. That is obviously not ideal since it limits folks from seeing your response. If you choose this method during the UpChat, adding a period before @Upworthy is key.

OK! You’ve got responding to questions down! What’s next?

During the chat, keep an eye on the “#UpChat #UN75” hashtags and the @Upworthy account so you can see the questions and responses from other participants. You can follow the hashtags by typing in “#UpChat” or “#UN75”in the search bar or simply clicking on the hashtags during the chat. You’ll be taken to a search results page that updates in real time with tweets from other users. And that’s it! See you on Twitter soon!

This global conversation is hosted by:

NextAre You a JA Alum? Here Are 6 Reasons to Join Gather.Next